Gulfshore Life has been sold to Open Sky Media

DeSilva+Phillips announces that Naples-based Gulfshore Life and Gulfshore Business magazines and other affiliated titles were acquired by Open Sky Media, Inc., a Texas-based publisher of city magazines in Austin, San Antonio, Oklahoma City, and Marin County, CA. Financial terms of the transaction were not disclosed.

“We’re thrilled to enter the Southwest Florida market,” said Open Sky Media CEO Dick Franks. “We look at local magazines all over the U.S. and rarely see a title stay number one in a market for 40-plus years. Through several owners, the Gulfshore brand has been known for excellence, attracting an affluent, highly desirable readership and launching titles to serve new niches in the marketplace.”

In addition to monthlies Gulfshore Life and Gulfshore Business, the company publishes annual magazines including Gulfshore Life At Home, Forever Young and Southwest Florida Guide to the Arts, and custom publications for local organizations such as Naples Community Hospital and the Greater Naples Chamber of Commerce. The Gulfshore division will be the largest of Open Sky Media’s five regional offices.

All Naples-based staff and management will continue with the new company, said Franks. Dan Denton, president of Gulfshore Media LLC and a Naples resident since 2002, will remain as executive publisher for several months before returning to Sarasota, where his company publishes Sarasota Magazine and other titles.

“Our magazines are in good hands with an emerging leader in the business,” said Denton. “Having the chance to build the Gulfshore brand during the past decade in Southwest Florida has been the highlight of my career, and I’m very grateful to our staff, contributors, customers and readers.” 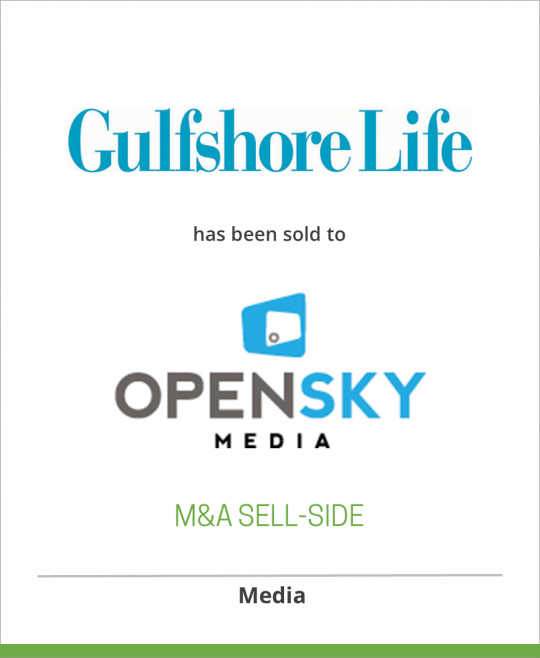 Details
TPG Growth has sold MarketTools Research Solutions to MetrixLabpreviousAnnie’s has acquired Knit and Crochet Now! from Candice Jensen Productionsnext
Sign up for our Newsletter!