“TV Guide Magazine has played an important role in television entertainment and pop culture for more than 60 years and is the perfect complement to our suite of media brands,” said NTVB President and CEO Andy DeAngelis. “Now more than ever viewers need a trusted guide to the vast array of available programming. By adding TVGM to our existing roster of TV-centric publications, we will be able to do more than anyone else to help them cut through the clutter and find the programming they want and value.”

The acquisition creates the country’s largest group of print publications for television watchers, with TV Guide Magazine’s 1.8 million subscribers and NTVB’s 1 million. Both groups also have a growing digital presence.

TV Guide Magazine is the No. 1 television magazine, the No. 2 entertainment magazine, and the 15th largest magazine in the U.S. Its iconic logo is recognized around the world. TV Insider is the fastest growing website in the entertainment category, powered by organic growth.

NTVB’s flagship TV Weekly magazine is a region-specific television guide that is marketed in partnership with more than 160 leading U.S. newspapers. NTVB also publishes Channel Guide Magazine, Hopper Magazine and VIEW! magazine in partnership with some of the largest cable and satellite companies in the nation.

The powerful combination of NTVB and TVGM will offer the largest, most efficient way to reach active television viewers. Together they will reach more than 20 million consumers when they are making their viewing decisions.

“Acquiring TVGM allows NTVB Media to offer advertisers a highly effective way to reach all segments of the TV viewing audience,” DeAngelis said. “Together, the properties will be extremely effective in helping programmers gain audience.”

TVGM CEO David J. Fishman and CFO Joe Clemente will remain with the company. “OpenGate and the great team at TVGM led by David and Joe have successfully right-sized TV Guide Magazine, driving profitability and positioning the company for success in the digital age,” DeAngelis said.

“We are thrilled to join the NTVB family,” Fishman said. “We think about the market the same way and we share the same DNA. Putting these companies together means we’ll be able to do more to help TV viewers discover what’s worth watching, which has always been TVGM’s core mission.”

“TV Guide Magazine has built strong levels of trust with consumers and the entertainment industry,” DeAngelis said. “In publishing, the winners will be those who are trusted – whether in print or online. TVGM has made a successful transition to the new age of television. It has been profitable every year since 2009, and now combined with NTVB is poised for strong growth. We believe that bringing the brand back into a publishing company focused on entertainment will help it flourish.”

By joining forces, the two companies encompass powerful digital capabilities that will help them speed development and content creation, and enhance digital marketing. In addition, both companies have strong editorial and creative staffs dedicated to developing new and unique offerings. 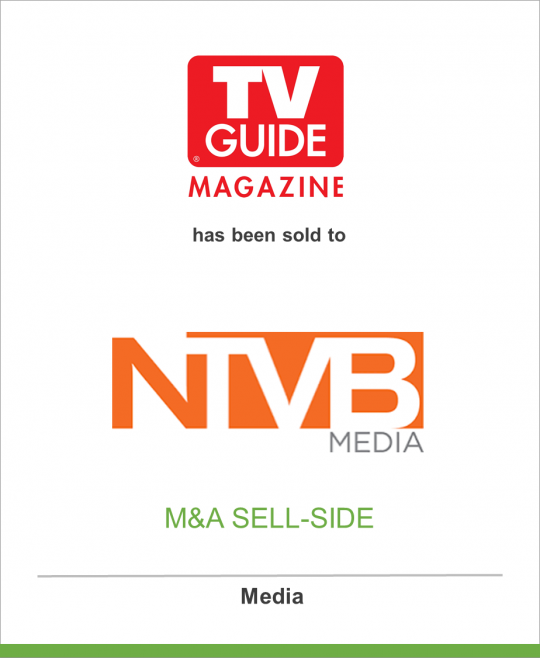