At a Global Conference, Reed Phillips Extols the Virtues of Valuation 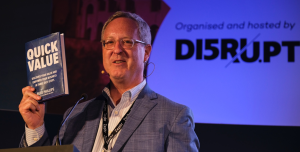 Too many media companies and other mid-sized businesses operate from day to day with no clear understanding of their value, Reed Phillips, managing partner at Oaklins, DeSilva & Phillips, told industry leaders at a global conference in Portugal on June 9.

Instead, many if not most “rely on conjectures or some anecdotes” to determine their value, Phillips said at the 44th FIPP World Media Congress, held outside of Lisbon. And they do so at considerable risk.

“Valuation is the best prism through which to examine the strengths and weakness of a business,” Phillips noted. While publicly traded companies have a built-in daily measure of their value, the share price, private companies do not have that luxury. Therefore, they must work a bit harder. Yet knowing the right value of their company is every bit as essential for them.

As Phillips observed, EBITDA is not always the best performance indicator of a business. Neither is the discounted cash flow model that is bedeviled by imperfect guesswork in financial projections. Furthermore, the cost of hiring professional appraisers, accountants, and investment bankers to conduct valuation proves prohibitive for many companies.

To work out a solution, Phillips advised companies to look inward and marshal resources at their disposal. Drawing upon his new book, QuickValue, written with Charles Slack, he made a case for an alternative valuation process that mid-sized private companies can conduct themselves, based on three straightforward steps.

First, a company needs to identify and rate its essential value drivers, the qualities that make the company unique. “It is important to be objective here,” he cautioned. “Having multiple people do the scoring is one way to minimize the bias.”

The next step entails determining the valuation range. Phillips recommended choosing 15 public companies and ranking their EBITDA multiples from highest to lowest. Some adjustments are necessary here since private companies are typically valued lower than public companies.

While QuickValue is not the only way to arrive at a valuation, it is simple enough that companies can value themselves at least once a year, using that information to guide key business decisions, Phillips noted. An updated valuation helps a company respond decisively to an unsolicited offer, improve low-scoring value drivers, and reward the team that consistently creates value.

FIPP is considered one of the world’s most prestigious media membership associations, its members include Axel Springer, The New York Times, The Economist, and Nikkei Business Publications. The annual congress is FIPP’s flagship event bringing together media and finance executives to discuss business trends and incubate the next big ideas that shape the industry’s future.

Critical Mention to become part of Onclusive, an STG companypreviousODP Awarded Publishing & Media Deal of the Yearnext
Sign up for our Newsletter!