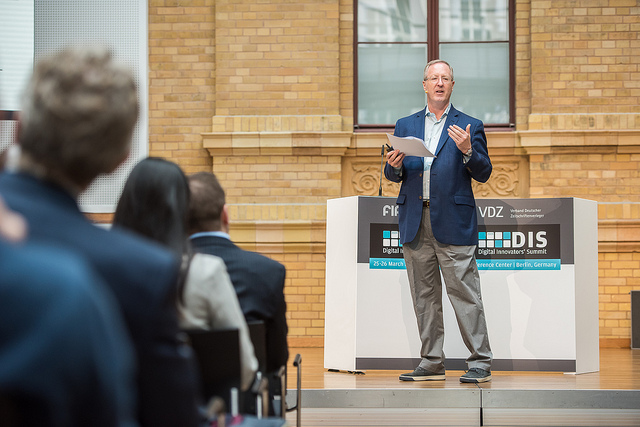 Keeping up with the demands of digital innovation as well as ever changing media marketplaces, has lead to a boom in mergers and acquisitions. In recent years we have seen publishers buying businesses to develop their existing brands via tech, events or digital services, or to acquire rivals and strengthen their positions in a specific market sector.

At DIS 2019 Reed Phillips, President of Oaklins International and founder of Oaklins DeSilva+Phillips, explained how mergers and acquisitions reward innovation.

Reed began by stressing that “innovation is one of the most critical elements in a magazine exec’s responsibilities.”

Before explaining what he meant by that statement Reed ran through his career, mentioning recent deals which include TV Guide, Sunset Magazine and Everything Magazine.

“Innovation is the introduction of something new,” explained Reed. He then spoke about attending a similar event 15 years ago, giving examples of businesses that needed to adapt or die. He spoke about high profile French restaurants in New York City, which all went out of business over a period of a couple of years. Reed explained that this was because consumers had shifted away from formal restaurant experiences and wanted informal ones.

He countered this by discussing how Pepsi managed to achieve double digit revenue growth by diversifying, via a series of partnerships, into bottled water, sports drinks, coffee and tea.

Interesting News in Education – March 2019previousDeal Flash: MJH Deal with Informa is Transformativenext
Sign up for our Newsletter!