The Vineyard Gazette has been sold to Jerome and Nancy Kohlberg

The Kohlbergs have established The Martha’s Vineyard Gazette LLC and will be taking over management of the paper from the Reston family who have owned and run the paper for 42 years. James (Scotty) Reston, the Pulitzer Prize winning New York Times columnist, bought the Gazette in 1968 from the Hough family, and he and his wife Sally Fulton Reston owned the paper until they passed away in 1995 and 2001 respectively.

Beginning in 1975, Mr. Reston’s son Richard and his wife Mary Jo began working for the paper, and in 1988 they replaced the senior Restons as publishers. In 1999 Mary Jo retired and Richard continued as publisher until the completion of this transaction.  He officially retired from the newspaper upon the publication of Friday’s edition (November 26, 2010). Richard and Mary Jo Reston, and his brothers, author James Reston Jr. and lawyer Thomas Reston, were co-owners of the Gazette prior to its sale to the Kohlbergs.

“After more than four decades of editorial direction by the Reston family at the Gazette, it is time for new leadership and energy at the paper,” Richard Reston said in a statement. “Mr. Kohlberg’s stewardship of the Vineyard Gazette comes at precisely the right time. He has my support and complete confidence that the Gazette will flourish under his direction in the years to come.”

In a statement following the completion of the transaction, Jerome Kohlberg said, “I would like to pay special tribute to Richard and Mary Jo Reston for their superb stewardship over the past 30 Years.?? He went on to say that his goal is to “give back to the Vineyard,” and to continue the “wonderful traditions from the past, offering excellent, in-depth journalism, reaching the Vineyard’s diverse communities, and adapting as necessary, to the changing economic conditions which are affecting print media all across the nation.”

DeSilva+Phillips Managing Director, Lon Williams, said, “It was an honor, and a pleasure to work with the Restons on their sale of what is one of the great, old community newspapers in the country.  It seems fitting that just last month, as the Restons’ long reign was ending, Vineyard Gazette was once again named Best Community Newspaper in New England by its peers – an award by its peers that has gone to the Gazette more often than any other newspaper in New England.”

About Jerome and Nancy Kohlberg

Mr. Kohlberg is well known on Wall Street where he was formerly a partner in the investment house Kohlberg Kravis Roberts; he left the company in 1987 and founded his own company and later a charitable foundation which is based in Mount Kisco. Mrs. Kohlberg owns an organic restaurant in Westchester County that began serving farm-to-table fare long before it was in vogue. They have four grown children, 13 grandchildren and two great-grandchildren, one recently born on the Island. Their Vineyard ties date back to 1943 when Mr. Kohlberg first came to the Island.

Mr. and Mrs. Kohlberg have been longtime seasonal residents of the Island who live in and operate businesses from Mount Kisco, N.Y. The Kohlbergs have been quiet philanthropists on the Vineyard for many decades, especially in the areas of conservation and education. 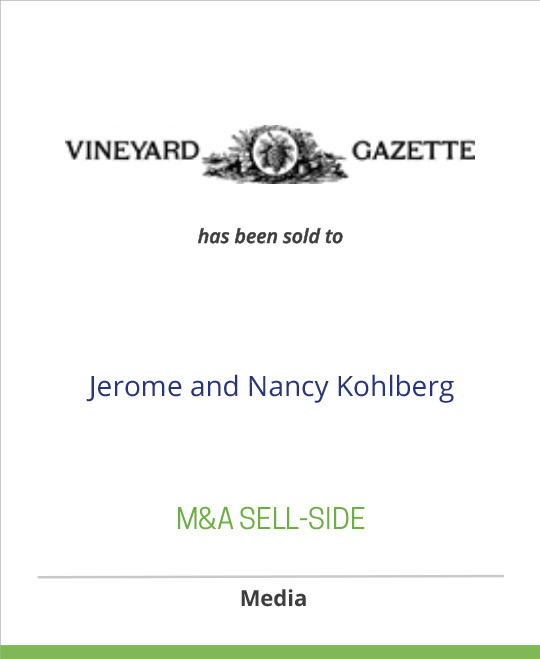