The Village Voice Is Acquired by Street Media

Oaklins DeSilva+Phillips client, The Village Voice, has been acquired by Street Media, parent company to LA Weekly and Irvine Weekly.

The sale comes after a multi-year effort by former owner, Peter Barbey, to create a full digital archive of The Village Voice to safeguard the paper’s complete historical record. The paper archive will be donated to a major New York public institution in the coming months. The sale covers almost all assets of The Village Voice. However, The Obie Awards will not be part of the sale to Street Media and will continue to be presented by The American Theater Wing.

“The Village Voice represents one of the most iconic papers in our nation and the very best of local media. For more than six decades, it was the heart of New York City and the voice of the community it served. We are proud to be able to revive both the digital and print editions of this paper,” said Brian Calle, CEO & Publisher.

The paper will resume in its digital format in January 2021 and will be published in print quarterly with plans to increase frequency over time.

“The Village Voice was more than a newspaper; it was a symbol of New York and American political and cultural progress. Though we were not able to overcome the economic conditions facing the news media industry, we have since worked tirelessly to ensure that The Village Voice inspires, informs and educates future generations. There may be no one better suited to continuing The Village Voice and preserving its history than Brian Calle,” said Peter Barbey.

Over its 63 years of publication, The Village Voice received countless accolades including three Pulitzer Prizes, the National Press Foundation Award, and the George Polk Award. The online publication won both the National Press Foundation’s Online Journalism Award and the Editor & Publisher EPPY Award for Best Overall U.S. Weekly Newspaper Online. The final print edition was distributed in September 2017 and featured a 1965 photo of Bob Dylan on the cover. After struggling with economic downturns, the paper halted its print publication, but provided daily coverage online until August 2018 when it ceased editorial content entirely.

At the time of the newspaper’s closure Barbey pledged to digitize the paper’s entire newspaper print archive going back to its founding in 1955. Over the past two years, the Voice’s staff has maintained an active archive, surfacing timely pieces. Senior Editor Bob Baker has led the digitization effort, with the help of David Swanson, also a Senior Editor at the Voice. The process encompassed all pre-natively digital material, totaling 146,000 spreads, or 292,000 pages of newsprint.

“The importance of being able to digitally search the historical content of the paper can not be underestimated. Literally, the entire history of New York politics, arts and culture resides in its articles, ads, and even classifieds,” said Peter Barbey.

“We plan to honor the rich history of this paper and build an innovative revenue model that brings it long-term sustainability,” said Brian Calle, CEO & Publisher. “There are no easy answers or silver bullets in running a media company today, but these institutions are too important for us not to try to preserve.”

The Village Voice’s unique mix of in-depth newswriting and reporting, including arts, culture, music, dance, film, and theater reviews, and comprehensive entertainment listings will continue to offer readers an indispensable perspective on the inner workings of New York City. 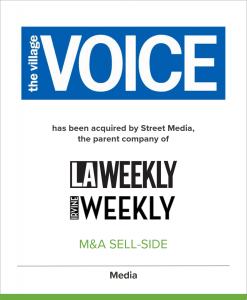