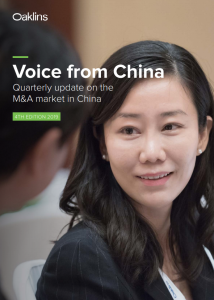 Quarterly Update on the M&A Market in China

With the United States poised to deploy its most powerful weapon, the dollar, how is China planning to circumvent the impact of a potential currency war? Our Shanghai-based Oaklins’ specialist Angela Chen looks at the Chinese government’s first steps towards digitalizing the RMB to decouple it from the US dollar system and examines the likely consequences for Chinese M&A activity. We analyze other significant drivers behind the latest trends and the indicators of their future development.

During the first nine months of 2019, foreign capital helped establish 30,871 new enterprises in China. A timeline of recent policy changes taken to relax restrictions on foreign direct investment clearly demonstrates the government’s commitment to encourage international access to the Chinese market. We chart recent M&A transactions by sector, region and value to identify where the greatest share of inbound and outbound deals took place.

This edition’s case study features Chinese retail and wholesale multinational Alibaba’s acquisition of Berlin-based startup Data Artisans, provider of distributed systems and large-scale data streaming services for enterprises. And we focus the spotlight on the technology, media and telecom (TMT) sector — originator of some of the hottest new technologies helping to revolutionize daily life in China — and its imperative need to pursue outbound acquisitions in order to gain self-sufficiency and access to overseas markets.

“Outbound transactions, on the other hand, are decreasing as a result of the trade war and Europe’s General Data Protection Regulation (GDPR), which inhibits investment from outside the European Union. The slowing global economy is also depressing outbound Chinese M&A, although there is still considerable activity among small and medium-sized companies, especially in regions where protectionist measures have been more muted.”