WebMD CEO Steven Zatz said the board is is open to a merger or the sale of all or part of the company, a move announced two months after its competitor Everyday Health was sold to J2 Global.

The board hasn’t set a timeline for the process, and no decisions have been made, Zatz told investors during Thursday’s earnings call. “There can be no assurance that the exploration of strategic alternatives will result in a transaction,” he said.

Zatz, a longtime WebMD executive, took over as CEO in September when David Schlanger stepped down.

WebMD now expects a faster decline in the growth of pharma advertising in 2017 than it had originally anticipated. The WebMD network, which operates sites including WebMD, Medscape, MedicineNet, and eMedicine, reported that its biopharma advertising sales came in $20 million lower in the last few weeks of the fourth quarter of 2016. 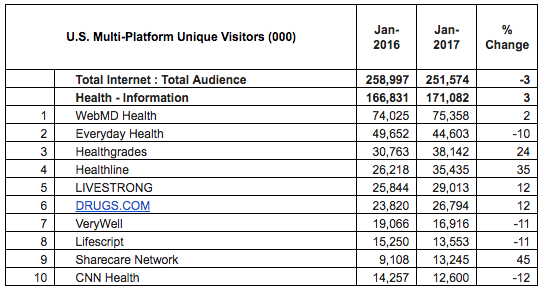 Drugmakers and their agency partners are acting in a more conservative manner, possibly due to pricing pressure, continued issues around managed care, and product launch challenges. Because of these factors, drugmakers are becoming more cautious with their budgets, reducing staff, lowering financial guidance, and delaying marketing budget decisions, according Zatz.

“We don’t, right at this moment, have a fix on what their marketing budgets will be for the year,” he said. “Certainly our guidance has taken into account the current environment as we can assess it.”

The announcement also comes a week after J2 Global said it plans to divest the less profitable parts of Everyday Health’s business, notably Cambridge BioMarketing, a rare-disease agency, and Tea Leaves Health, an agency that works with hospitals.

“For Cambridge, the obvious buyers would be the strategy, medical communications agencies who already have some life sciences marketing capabilities,” said Karpay. “For Tea Leaves, it could be a much broader audience of existing software markets that have [software as a service] business but are not in healthcare and they want to get into the healthcare space. Even if Tea Leaves is losing money, it could still be a terrific investment for a buyer who is interested in the space.”