CaseLines, a LegalTech platform, is acquired by Thomson Reuters

Oaklins DeSilva+Phillips supported Oaklins Cavendish and its client, CaseLines, a leading cloud-based court document and evidence management platform, in its acquisition by Thomson Reuters. The CaseLines platform facilitates users, such as governments, judges, courts and legal practitioners to ensure that this essential service to courts and the justice system is technically available anywhere to those who need it. The CaseLines platform delivers justice efficiencies for the court room and is expediting the digital transformation of legal processes for governments, judges, courts and practitioners around the world.

CaseLines enables the legal community to securely manage, organize, share and present evidence between the courts and legal teams both remotely and in person. CaseLines digitizes court processes by essentially eliminating paper and creating digital court files managed on one common platform. It empowers anyone with a phone, or an internet connected device to maintain workflows in the justice system, anytime and anywhere.

“We are thrilled to have supported CaseLines in its sale to Thomson Reuters. CaseLines has developed technology that is transforming the legal system helping courts adapt to this time of COVID-19 and creating a more effective and efficient justice process for the future,” said Joanna Stone Herman, Partner at Oaklins DeSilva+Phillips.

The acquisition of CaseLines enhances Thomson Reuters offerings in the courts administration space and furthers the company’s strategic approach to deliver innovative end-to-end solutions to its legal community partners internationally. CaseLines has proven successful in the UK, and the acquisition further supports a recent agreement between Thomson Reuters and Ontario’s Ministry of the Attorney General to provide CaseLines to support civil, criminal and family courts across the province.

“By bringing Thomson Reuters CaseLines to our province, a game changing technology that will make Ontario a leader in modern court systems, I sent a clear signal that we have put an end to watching Ontario’s justice system fall continuously behind. Together with our justice partners, we have moved our entire justice system forward by decades in a matter of months during the COVID-19 recovery, and we are not looking back. This procurement by the Ministry of the Attorney General is part of a broad and urgent strategy to build a more responsive and resilient justice system that supports the safe expansion of in-person and virtual court proceedings,” said the Honourable Doug Downey, Attorney General of Ontario.

“I am thrilled that Thomson Reuters CaseLines – a robust, online digital platform with a proven track record in courts around the globe – will be implemented in the Ontario Superior Court of Justice. With the strong support of Attorney General Doug Downey, this tool will significantly advance our shared goal of a modern, efficient and accessible justice system,” stated Chief Justice Geoffrey Morawetz of the Superior Court of Justice in Ontario.

The demand for transformation to more technology-driven solutions has increased around the world during the COVID-19 pandemic. Challenges to maintaining court proceedings and operating effectively in old paper-based systems may have caused delays in justice being served.

“The COVID-19 pandemic is driving the courts to expedite their transition to the digital era,” said Stephen Rubley, President of the Government Segment of Thomson Reuters. “The CaseLines platform enables the courts to operate in a faster, more efficient manner, helping people get the justice they deserve. By developing new technologies and capabilities, of which we are at the forefront, our aim is to support our customers in creating an increasingly accessible justice system for all.”

“In Thomson Reuters we found a strategic buyer that shares our commitment to delivering a step change in the efficient delivery of justice,” said Paul Sachs, Founder, CaseLines. “We have a proven record of enabling the courts’ digital transformation in the UK. We are optimistic that with Thomson Reuters global footprint we will be able to help courts around the world continue to operate effectively and efficiently into the future.”

“CaseLines has significantly transformed our Criminal Justice system in the UK. Paper documents have been replaced by the CaseLines digital system and the Judges are universally positive about the efficiencies this has created for everyone working in the Crown Court and the Court of Appeal. Without CaseLines it is very difficult to see how we would have been able to function during the coronavirus difficulties,” said The Right Honourable Lord Justice Fulford, Vice-President of the Court of Appeal (Criminal Division), England and Wales. 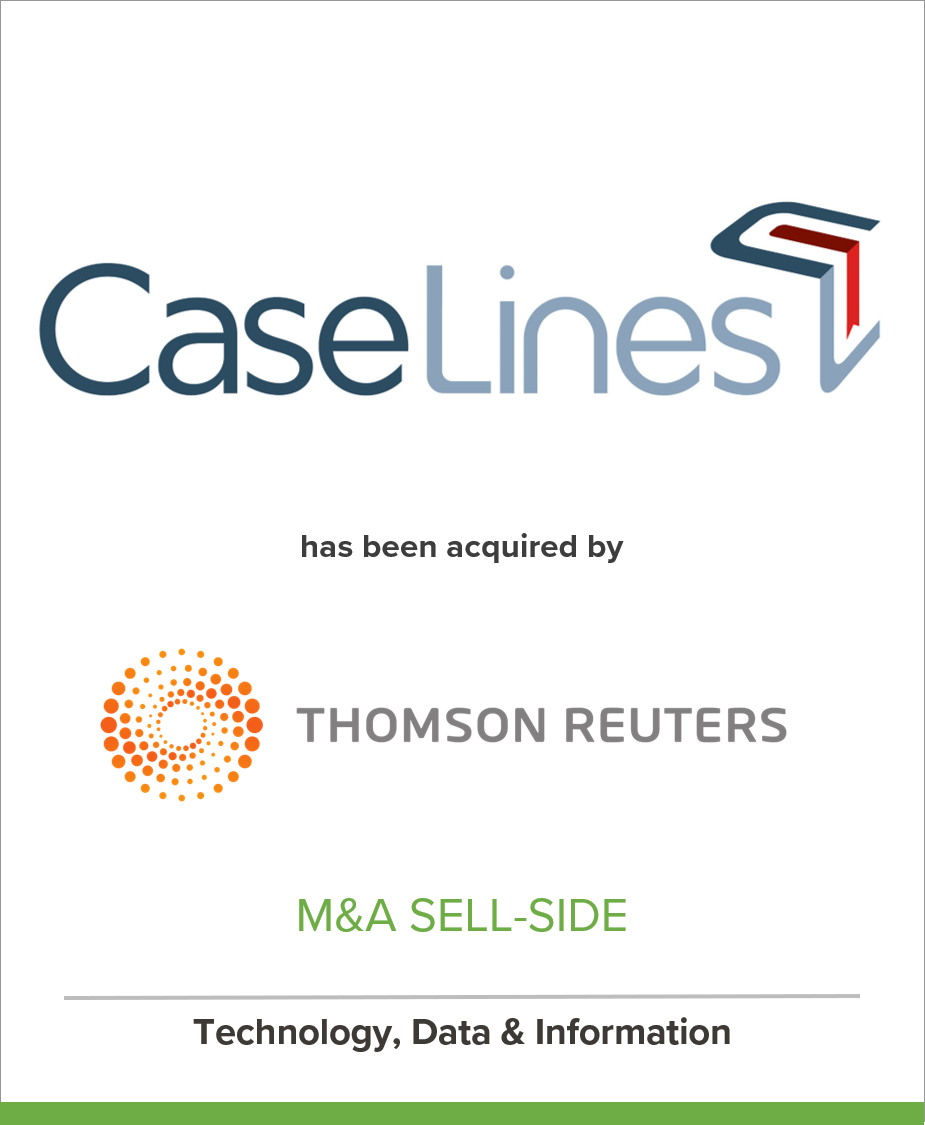