D+P client, Network Communications Inc. announced that it accepted and signed an offer from WiesnerMedia LLC of Greenwood Village, Colo., for its purchase of Colorado Homes and Lifestyles and Mountain Living magazines. Terms of the transaction were not released.

WiesnerMedia previously owned both publications and sold them to NCI in May 2005. The buy-back comes at a transitional time for the media and publishing industries.

“It’s a little different now because we deliver content the way our readers want it,” said Dan Wiesner, CEO of WiesnerMedia. “It used to be print; now it’s print, events, online, eNewsletters, mobile, etc. We now help our customers connect with buyers the way they want.”

Started in 1980, Colorado Homes and Lifestyles, is a regional publication dedicated to interior design, home remodeling and the quintessential Colorado lifestyle.

WiesnerMedia originally purchased Homes from its publisher Garrett Gian in 1989 and started Mountain Living as a spin-off from CHL in 1995.

“Returning to WiesnerMedia is like a homecoming for us,” said Holly Scott, Publisher of Colorado Homes & Lifestyles and Mountain Living.   “We are thrilled to be owned and operated again by a local company.  We couldn’t be happier with this new chapter for our brands.”

According to WiesnerMedia, both publications will maintain their current teams and eventually merge their offices with those of WiesnerMedia.

WiesnerMedia is a full-service, nationally recognized, award-winning company that covers the full spectrum of publishing including: sales, editorial, design, photography, production, printing and circulation. The company owns a portfolio of award-winning magazines and newsletters in a variety of industry verticals, including travel, higher education, the performing arts, business and energy.

WiesnerMedia comprises both a consumer division, with its ownership of popular city magazine Pittsburgh Magazine and Trucking Times, as well as a business/trade division, with titles such as a ColoradoBiz, the state’s long-standing business-to-business publication written for professionals. CH&L and Mountain Living will be housed under the consumer titles umbrella. 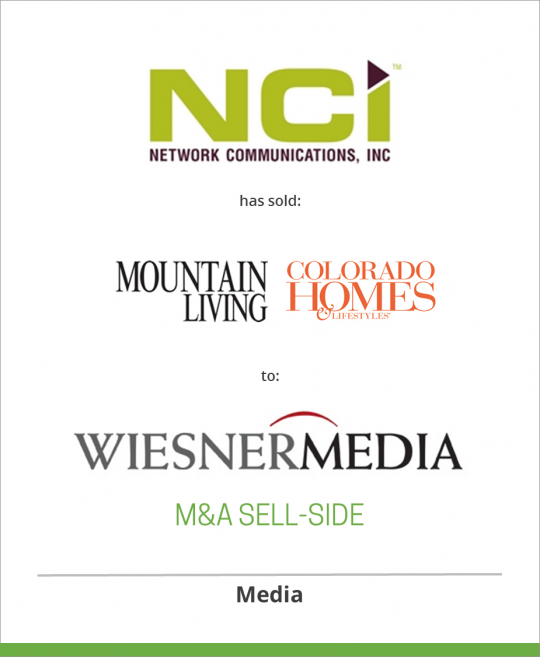 Details
Endurance Business Media has been sold to NewPoint Media GrouppreviousNetwork Communications Inc. has sold Atlanta Homes & Lifestyles and two events to Esteem Medianext
Sign up for our Newsletter!